You are here: Home / News / News / What are the nucleic acid extraction methods?

Nucleic acid is an amphoteric electrolyte, which is equivalent to a polyacid. A neutral or alkaline buffer can be used to dissociate nucleic acid into anions, which are placed in an electric field and move towards the anode. This is the principle of electrophoresis.

Principles and requirements of nucleic acid extraction and purification

1. Ensure the integrity of the primary structure of nucleic acid;

2. Eliminate pollution from other molecules (such as eliminating RNA interference when extracting DNA);

3. Nucleic acid extraction kit samples should not contain organic solvents that can inhibit enzymes and high concentrations of metal ions;

4. Minimize macromolecular substances such as proteins, polysaccharides and lipids as much as possible. 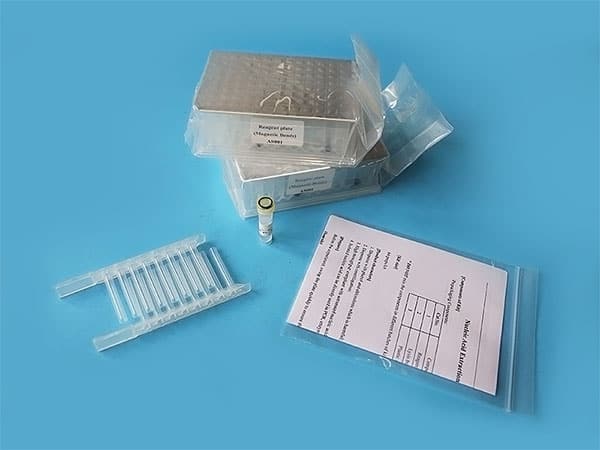 MicroRNAs (miRNAs) are small, highly conserved RNA molecules, such as small interfering RNAs (siRNAs), which regulate the expression of their homologous mRNA molecules by base pairing with them to prevent expression through various mechanisms. They have become a key regulatory agency for development, cell proliferation, differentiation and cell cycle.

For gene structure and function research and gene diagnosis, it is usually required that the length of the obtained fragment is not less than 100-200kb. In the DNA extraction process, various factors that cause DNA fragmentation and degradation should be avoided as much as possible to ensure the integrity of DNA and lay the foundation for subsequent experiments.

The plasmid extraction method is to remove RNA, separate the plasmid from the bacterial genomic DNA, and remove proteins and other impurities to obtain a relatively pure plasmid.

Invented in 1956, after phenol/chloroform treatment of cell crushing liquid or tissue homogenate, nucleic acid components mainly composed of DNA are dissolved in the aqueous phase, and lipids are mainly contained in the organic phase, and proteins are located between the two phases.

Through the special silicon matrix adsorption material, DNA can be specifically adsorbed, and RNA and protein can pass through smoothly, and then use high salt and low pH to bind nucleic acid, and low salt and high pH elution to separate and purify nucleic acid.

Heat the DNA solution to use the characteristics of linear DNA molecules to separate the DNA fragments from the precipitate formed by denatured proteins and cell debris by centrifugation.

The surface of superparamagnetic nanoparticles is modified and modified by nanotechnology to prepare superparamagnetic silicon oxide nanomagnetic beads. The magnetic beads can specifically recognize and efficiently combine with nucleic acid molecules on the microscopic interface. Using the superparamagnetism of silica nanospheres, under the action of Chaotropic salts (guanidine hydrochloride, guanidine isothiocyanate, etc.) and an external magnetic field, DNA and RNA are separated from blood, animal tissues, food, pathogenic microorganisms and other samples .

In addition to the above-mentioned commonly used methods, there are multiple methods such as ultrasound, repeated freezing and thawing, enzymatic hydrolysis, and hypotonic lysis.

To stop the new coronavirus (2019-nCoV), Aisen is in action

What are biomagnetic beads and how to buy them?
Scroll to top