You are here: Home / News / News / Application of immunomagnetic beads in the field of biomedicine

Immunomagnetic bead technology is a technical method that appeared in the 1980s. Based on immunology, it has penetrated into various fields such as pathology, physiology, pharmacology, microbiology, biochemistry, and molecular genetics. It has become more and more widely used in immunoassays, cell separation, purification of biological macromolecules, and molecular biology.

Magnetic beads are composed of core metal particles (Fe2O3, Fe3O4), a polymer material (such as polystyrene, polyvinyl chloride) wrapped in the core outer layer, and the outermost functional ligand (such as -NH2, -COOH, -OH, -CHO) composition.

Application of immunomagnetic beads in the field of biomedicine 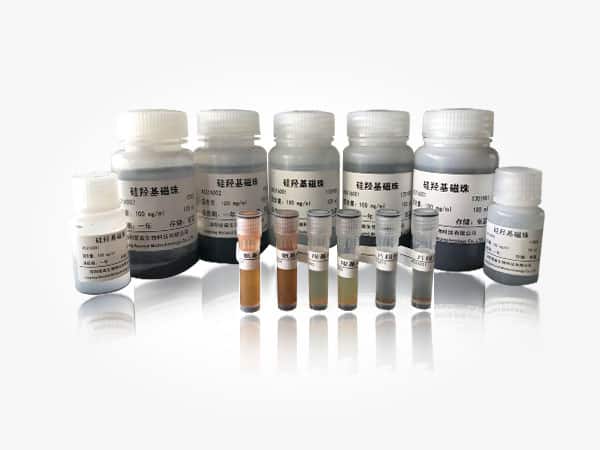 Immunomagnetic bead cell sorting can separate very high purity cells from complex cell mixtures within a few minutes. When using nano-scale magnetic beads for cell sorting, the size of the magnetic beads and its composition make it biodegradable without activating the cells or affecting the function and vitality of the cells, and the physiological functions of the cells are also unchanged. Magnetically labeled cells can be used immediately for analysis and subsequent experiments.

Cell sorting can be divided into

a) Positive sorting (positive sorting): The cells bound by magnetic beads are the cells to be separated, which is suitable for flow analysis and cell-based analysis.

b) Negative sorting (negative sorting): The magnetic beads bind to unwanted cells, and the cells free in the supernatant are the desired cells.

The application of antibody (protein)-coated immunomagnetic bead purification technology does not require complicated chromatography equipment, and has no limitation on the clarity of the sample. It only requires a simple magnetic adsorption step to easily separate the monoclonal antibody from the monoclonal antibody expression product. Effectively solve the shortcomings of traditional chromatography technology.

Under a high gradient magnetic field, the immunomagnetic bead method is used to separate B and T lymphocytes in abdominal blood or veins. The separated lymphocytes are then widely used in the rapid selection of clinical organ transplantation donors and recipients. Perform HLA-I type II antigen typing.

Whether it is magnetic beads used to extract nucleic acids or immunomagnetic beads used in cell sorting and immunoassays, they are still a subdivision of the industry in the field of molecular biology, and the technology is still in continuous progress and development. As more and more companies join, the prices of products developed by them will also become cheaper.

How to perform nucleic acid extraction

What are the nucleic acid purification technologies?
Scroll to top